Hit enter to search or ESC to close

A second announcement involving the Google Cloud was made later that week. Looker joins the Google Cloud. In other words, Google is going to acquire Looker. “Looker is a business intelligence software and big data analytics platform that helps you explore, analyze and share real-time business analytics easily.” Read the blogs of Thomas Kurian (CEO at Google Cloud) and Frank Bien (CEO at Looker) for more details about the acquisition. Other news about this subject is (of course) all over Google.

“The acquisition of Looker is expected to be complete later this year, subject to customary closing conditions, including the receipt of regulatory approvals.”

My first reaction to the news about Google’s Looker acquisition was; What will this mean for the combination Looker and Snowflake? Google has a Snowflake competitor; Google BigQuery which already is a perfect match with Looker. The integration of Looker into Google Cloud Platform (GCP) will deepen, but Looker will operate as an independent subsidiary. According to statements from both Google as well as Looker, so current and future customers do not need to worry; “This empowers companies to create a cohesive layer built on any cloud database, including Amazon Redshift, Azure SQL, Snowflake, Oracle, Microsoft SQL Server or Teradata, as well as on other Public Clouds, and in on-premise data centers.”.

Both companies are committed to a multi-cloud strategy. This means an organization can lverage the elasticity and flexibility of the cloud, and in the meantime giving organizations freedom of choice when it comes to a (data) strategy that fit their specific needs and business goals. The announced partnership and availability of Snowflake in GCP is one prove of that commitment.

Thomas Kurian specifically called out that he wants to preserve and grow Looker’s partnership with Snowflake because it is a key partnership for Google Cloud. According to Kurian; “The combination of Google and Looker provides an end-to-end analytics platform to connect, collect, analyze and visualize data across Google Cloud, Azure, AWS, on-premises databases and ISV applications.”. Looker is remaining a multi-database and multi-cloud data platform. Of course the combination of Google and Data makes people a little bit hesitant, but Kurian emphasized; “We’re not buying any data along with this transaction.

What will the future bring?

I am very curious what this acquisition will bring for the future. It’s likely that AI (Artificial Intelligence) and ML (Machine Learning) capabilities are going to be integrated.

In an effort to become an end-to-end Data & Analytics platform (being able to ingest data, wrangle & pre-process data, understand various types of data), Google needs to strengthen its Data Integration / Data Preparation / Data Wrangling capabilities. Hence the collaboration with Trifacta to create Google Cloud Dataprep. Both BigQuery and other (cloud) data sources whether in the Google cloud, on premises or another cloud will be served through Looker.

“Why would Google choose to invest in Looker?” 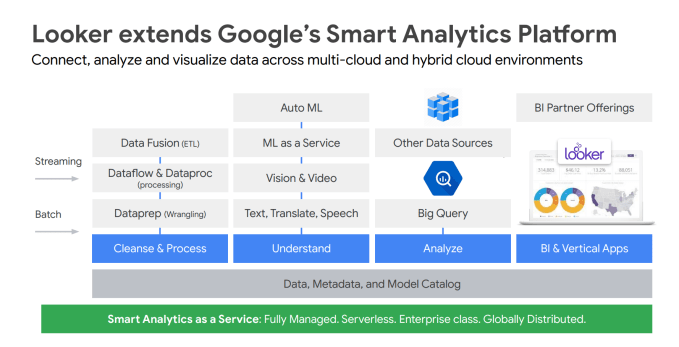 Firstly, Google did not have a real front-end tool for slicing and dicing data. Microsoft has PowerBI and Amazon offers QuickSight. Oracle offers OAC in the Oracle Cloud, but I guess they have to do more efforts to be multi-cloud.

Secondly, on top of lacking a real BI Platform, Looker’s products are built to take advantage of the modern data storage platforms, such as Snowflake and Google’s BigQuery. Central in Looker’s product offering is a proprietary language; LookML. This centralized Data Modeling language is an extension on top of SQL and enables governance, which promotes consistency and reuse. There is a central place to define and model your data, being a single point of access to analyze and visualize the data.

According to Bien, there are three waves of BI. Number one being the big monolithic stacks like Business Objects, Cognos and Microstrategy. The second wave of BI systems did things separately, like data preparation or visualization like Qlik and Tableau. The answer to the changing data infrastructure is in wave three where tools like Looker offer a new complete data platform.

Last but not least the two companies share more than 350 customers, giving Google the opportunity to up-sell to other parts of the Looker customer base.

The fact that Looker joins the Google Cloud is not the first; For instance Alteryx bought ClearStory Data; “an enterprise-scale, continuous intelligence analytics solution for complex and unstructured data” earlier this year. According to Alteryx; “The acquisition of ClearStory Data will help Alteryx continue to be a leading innovator of a code-free platform for citizen data scientists and a code-friendly one for trained statistician”.

In addition to the above, a few more announcements have been made in the Data & Analytics atmosphere. For example Microsoft introduced AI Builder for Power Platform. Further Logi Analytics and Zoomdata joined forces. Also Periscope Data is combining forces with Sisense.

In the meantime also Oracle and Microsoft announced an interoperability partnership. Together, Oracle Cloud and Microsoft Azure are making multi-cloud a reality. And while I am writing this blogpost another big announcement is made in the Data & Analytics area; “Salesforce signs Definitive Agreement to acquire Tableau”. More details here. Personally I didn’t see that coming. For me it also would have made sense for AWS to acquire Tableau. Who will be next?

Do NOT follow this link or you will be banned from the site!