Last week I followed a Python Essentials course at The School of Data Science in The Hague. At a certain point we discussed Streamlit. This open-source framework could be a potential Power BI killer when it comes to visualising data and interacting with data. Interesting enough to check it out. It became even more interesting when I saw the following announcement the next day; Snowflake to Acquire Streamlit.

First I had to make sure that I could use Python and Streamlit in combination with Snowflake. I have Anaconda installed on my local machine. Within Anaconda I have made a separate environment to check work this example out. In this environment I installed Streamlit and the Snowflake Connector for Python.

In combination with my Snowflake-account all should be in place to get things going.

Getting Started with Python

Following the Getting started with Python-guide, I’ll make sure I can interact with Snowflake from Python. First I have to validate whether the connection from Python with Snowflake can be made. In the QuickStart you can see that the credentials are visible in the .py-file.

If you do not want that, there is an alternative solution with a separate file for the credentials and a reference to that file in the .py-file. I created a short example.

In the Credentials-file you can register the various components necassary to connect to Snowflake:

If you use this setup and you use version control like Git, make sure to put the credentials file in .gitignore.

In Github I uploaded my first Streamlit App. It’s nothing more than a Python-script which consists of a few blocks:

Thanks for reading and till next time. 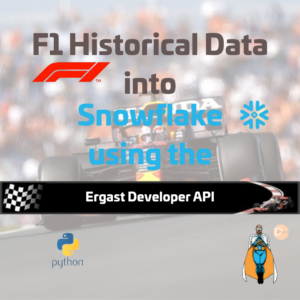 Recently I blogged about loading F1 Historical Data into Snowflake. The first time I downloaded the related .csv-files from Kaggle. In a consecutive post I Uncovering the Unblemished Truth of Snowflake

Last week I was attending the Snowflake ❄️ Data for Champions. A restart of the Dutch Snowflake UserGroup.